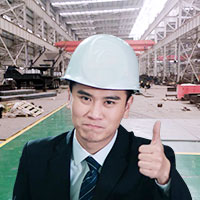 Preface:
The gold ore resource on the earth is scarce and unevenly distributed. The 80 or so gold producing countries have different levels of gold mining and production.
This article sorts out the resource status and production status of gold ore in each continent except Antarctica and summarizes the potential of regional gold ore mining by analyzing the policies and other factors in each region.

You will see the following topics:

2. Annual Production of Gold by Country

Based on Metal focus data, among the 186,230 tons of global gold ore resources, there are about 56,770 tons of proven and probable gold ore. At current producing speed, these gold resources will meet the production demand of about 16 years. In addition to another 129,460 tons of measured, indicated and inferred resources are identified to satisfy another 50-year demand.

From this table, it is clear that, except for in Europe, the gold deposits in every continent are of relatively considerable quantity. Commonwealth of Independent States has an outstanding performance. In CIS, Russia and Uzbekistan have far more gold ore resources than other countries, ranking the third and fourth in the world respectively.

In this table, gold reserves can be understood as the gold that a country or a region owns officially. In a way, this data reflects the changes in the gold market and is of special significance for a government to stabilize its national economy, curb inflation and improve its international credit.

The types of gold deposits are complex and diverse. In the following text, gold deposits that have economic mining value are provided in terms of the continent. 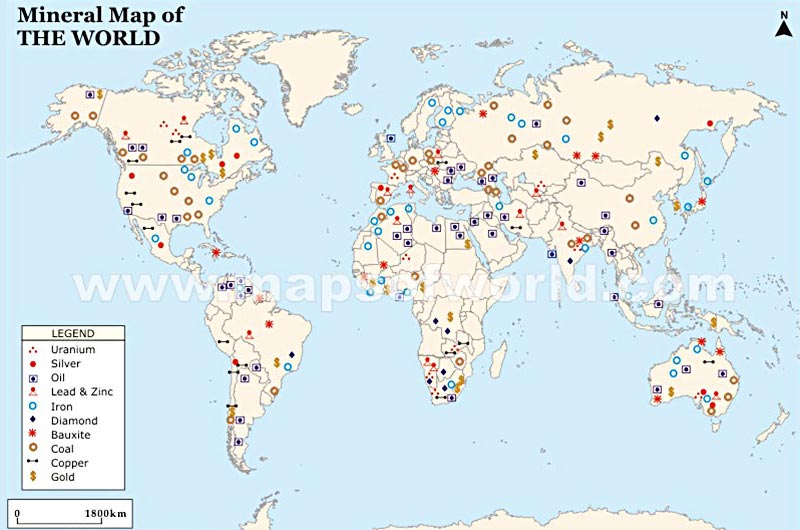 Africa may be the first word that jumps out in your mind in the age of gold. As seen from the table above, Africa is rich in gold ore resources. As a traditional gold producing region backed by abundant gold ore reserves, Africa has occupied a solid corner of the world gold market since the gold rush began.

Based on the known situation, gold resources in Africa are widely distributed, almost every country has more or less gold distribution. The main gold ore resources countries are South Africa, Ghana, the Democratic Republic of the Congo, etc. 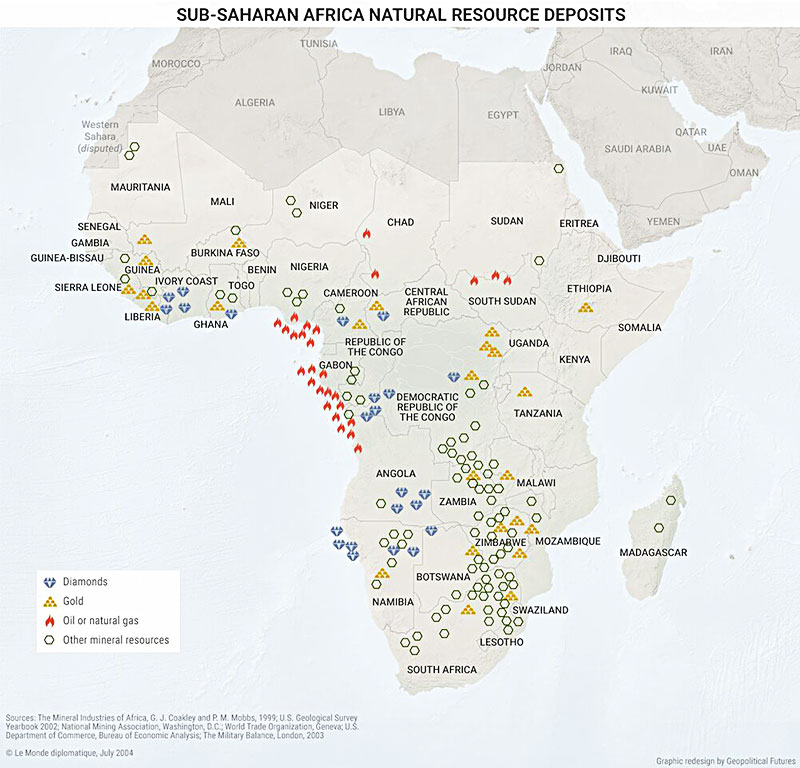 Egypt has some gold deposits, while very little gold mining activity. At present, there is only one gold deposit in operation: the Sukari mine.

Mozambique and Chad are rich in mineral resources, most of which are untapped.

The gold deposits in Burundi are widely distributed, especially in the northwest.

Five gold deposits have been discovered in Sierra Leone, and in the southern province, there is a considerable amount of gold ore.

Zimbabwe also has a large amount of gold ore, producing the world's most gold per square kilometer (6kg/km2). Right now, only 25% of its gold ore resources are mined.

On the whole, as the traditional area of gold, Africa still has great potential for gold mining. More standardized mining market and friendly policies of some countries also provide a guarantee for foreign investment in gold mining in Africa.

Except for Africa, another continent that owns a large number of gold ore resources is Asia. As the largest continent, Asia accounts for about one third land area of the planet. Vastness may be one reason why Asia is rich in minerals. 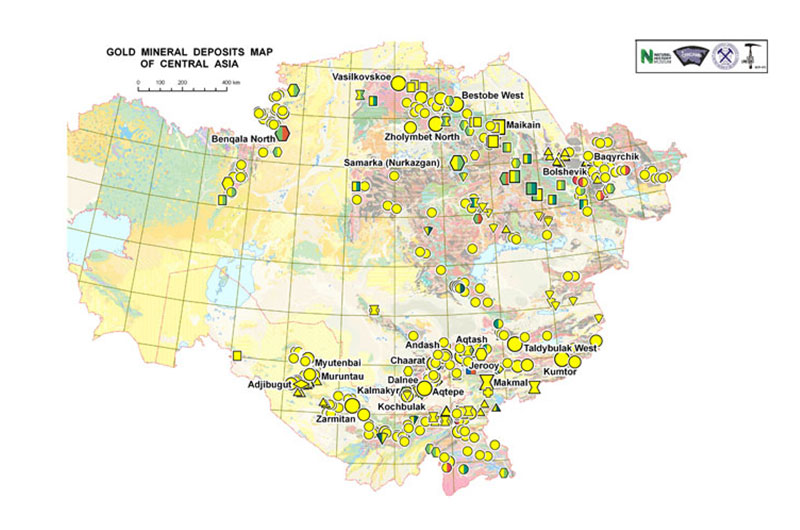 The gold deposits in Mongolia are widely distributed in the whole country, which is the dominant mineral species in Mongolia. With various producing areas, Mongolia has a large gold mining potential.

The proven gold resources in Uzbekistan has ranked the fourth in the world by 2015. While there is less than 10% of the gold mined, which means it is still a country with great gold mining potential.

Gold deposits are the superior mineral resources in Kyrgyzstan as well. The gold deposits mining degree is generally higher, which results in a large mining potential and good developing prospect.

Gold deposits are extensively distributed in Laos. There is alluvial gold in the alluvial deposit of rivers and streams.

North and South America are the other two gold-rich continents. The countries with the larger land areas include the United States, Canada, Mexico and so on.

The vast land area and geological conditions also provide a hotbed for the production of gold deposits in these countries.

The gold resources in North and South America are mainly distributed in the United States, Mexico, Peru, and Canada. It has also been proved in Dominica, Argentina, Guyana, Bolivia, Suriname, and Chile.

Although the United States is rich in gold resources, some of them are deep and difficult to exploit.

Mexico has special geological conditions with many mineralized zones and open-pit quarries.

The gold ore in Peru, which ranked seventh in the world in 2013, has only about 10 percent of its proven reserves in production because of a lack of funding and poor technology. Preliminary investigation and exploration results show that there are more than 60 gold deposits in southern Peru.

In Argentina, about 337 gold deposits and mineralization points have been found in 21 metallogenic belts.

As a continent with few countries except Antarctica, Australia occupies most of the land area of Oceania. The majority of other Oceanian countries are island countries, so the distribution of gold resources is relatively limited.

Annual Production of Gold by Country

Gold mining began with human civilization's appearance. Ancient Egypt was regarded by historians as the world's first major gold producer. And human demand for gold has not diminished since the Neolithic age.

With the development of exploration and mining technology, the gold production of each country is updated every year. According to the data, the top three countries in gold production in 2018 are China, Australia, and Russia, which have rich gold resources. Other countries that have reached their potential include traditional gold-producing countries such as Ghana and Mali. Besides, Mongolia, Brazil, Peru and other countries that have discovered new gold deposits are also expected to take advantage of their resources. 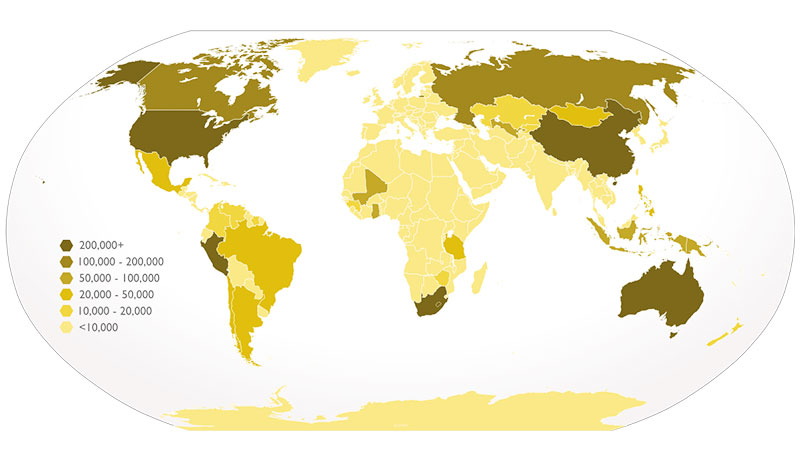 This paper holds this opinion that investors should investigate the local gold deposits ahead of the investment, including the number of resources, burial depth, the grade of gold ore, etc. In addition, they need to get acquainted with the development status and government policies. If possible, investors should make several field visits and learn about the local situation in person. After all, caution is needed when entering the market for which investment is risky.